I Looked Into That Empty Bottle And I Saw Myself

In 2015, the beer brewery Kompaan asked us to do a mural on the wall of their newly set up brewery & bar. As we were already working on their brand – designing their beer labels, identity, stickers & posters etc. – we didn’t want to create something completely new as they were just getting their brand known to the world. Instead, we wanted to fill the wall with elements we already designed, but used in a different way. So we came up with the idea to make a design of bottles completely made out of the signature black & white stickers. 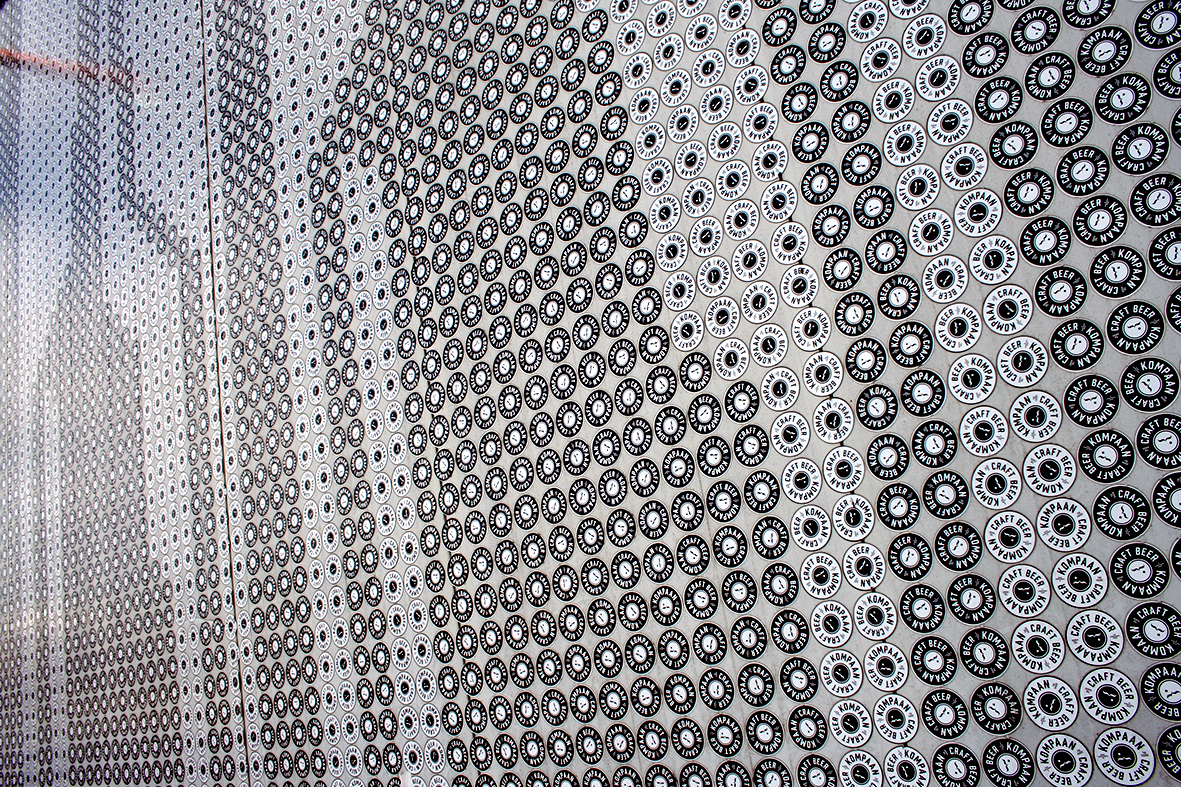 After the succesful launch of the Binckse Belofte identity we were asked by Mobiel Projectbureau OpTrek to design an identity for the new platform ‘ReSource City Binckhorst’. A platform which aims at mapping and connecting the different types of knowledge and craftmanship in the Binckhorst industrial business area in The Hague, which also spawned the Binckse Belofte beer as an ‘ambassador’ for the region.

We were wondering if a font, instead of a logo, could also function as an identity, as well as being available for other initiatives coming from the area as a collective ‘Binckhorst font’. We started out by dividing the area in 4 different recurring themes from the area. This provided us with different ‘weights’ to come up for the font. (Normally being ‘Regular’, ‘italic’, ‘Bold’ etc.)

The weight references we came up with are ‘Regular’, for the foundation of the typeface. ‘Auto’, coming from the large automotive industry in the district. “Container” coming from the many shipping containers spread around the inland port. And ‘Metal’, which is rather abstract coming from the musical genre in which we categorized the Binckhorst.

We first designed a typeface basis, and went from there to shape the other weights into new forms, which are all intertwined in order to have the possibility to mix the different weights together.

After the typeface was launched we saw that different parties started using the font. Even the municipality of The Hague started using it for their bi-annual Binckhorst-district newsletter, which was a huge plus for us, seeing the font working on different levels: A typeface, an identity and also being the latest ‘ambassador’ for the district, resonating with the philosophy of the platform. 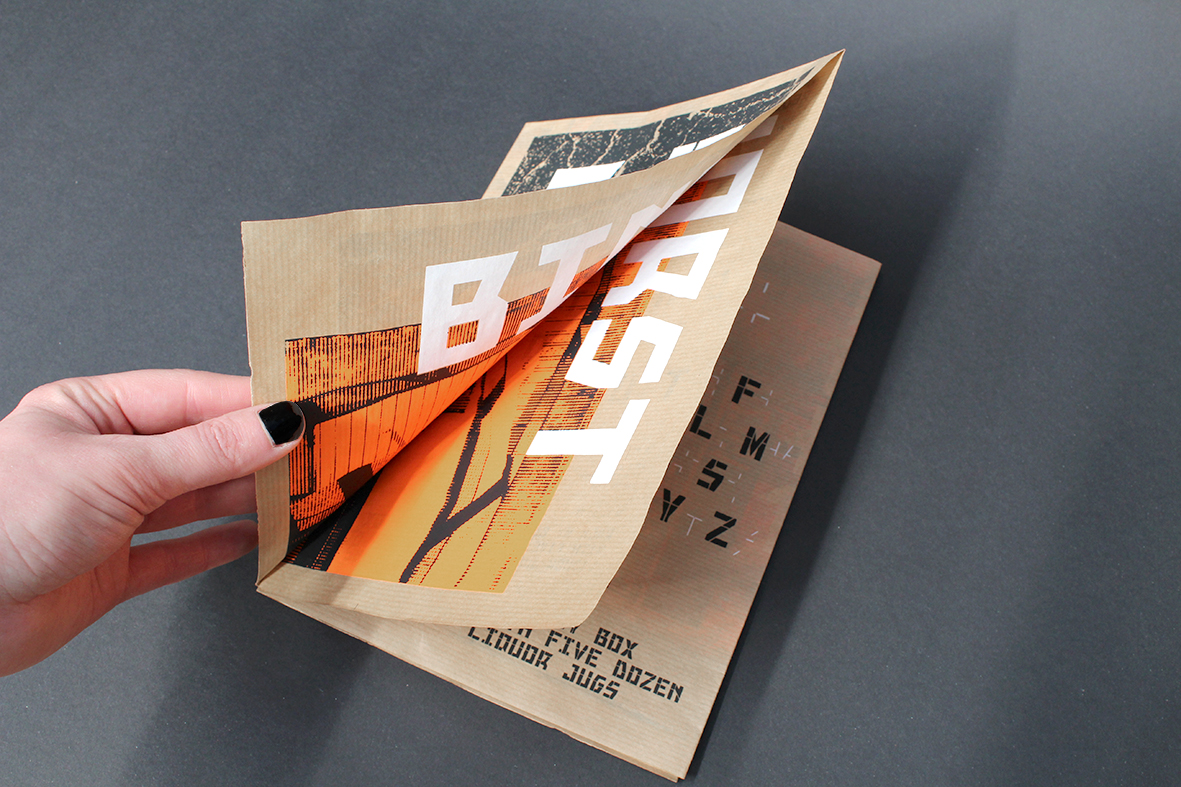 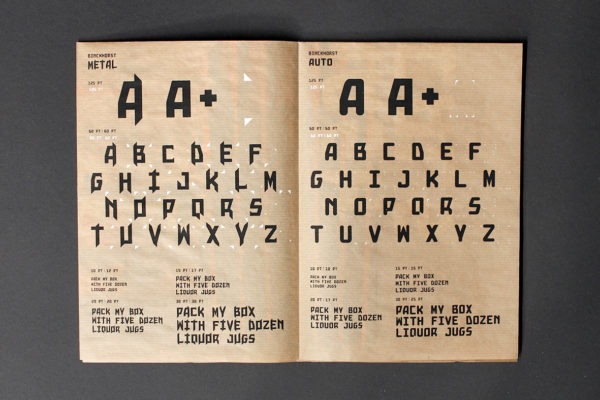 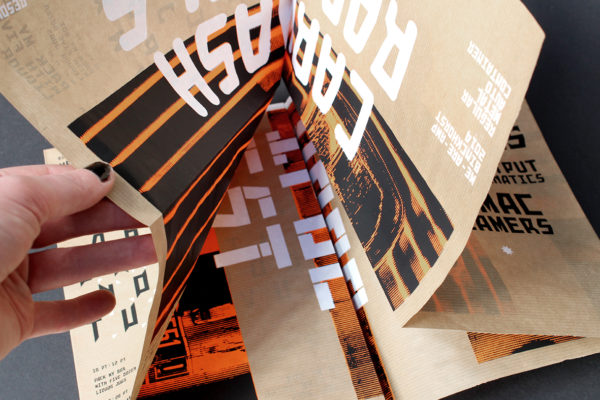 Binckse Belofte is a beer brewed by and for “de Binckhorst” in The Hague. An industrial business area with a hands on workers mentality. We we’re asked by Mobiel Projectbureau OpTrek – who took the initiative – to come up with an outstanding visual identity.

We made the label out of screen printed sandpaper as a metaphor for the ‘getting your hands dirty’ mentality, as well as making the beer the next ‘tool’ for the area.Typography is derived from the many shipping containers in the area, since the Binckhorst has an inland port. The crates are made from wooden pallets floating around in the area, which left a lot of spare wood – which turned out to be excellent beer coasters. Lastly, every beer needs a glass. We bought them all from the second hand thrift stores in the neighborhood, and stripped of the original beer logos with… sandpaper.

In 2013 Binckse Belofte was included in the Living Heritage collection of the Historical Museum of The Hague. 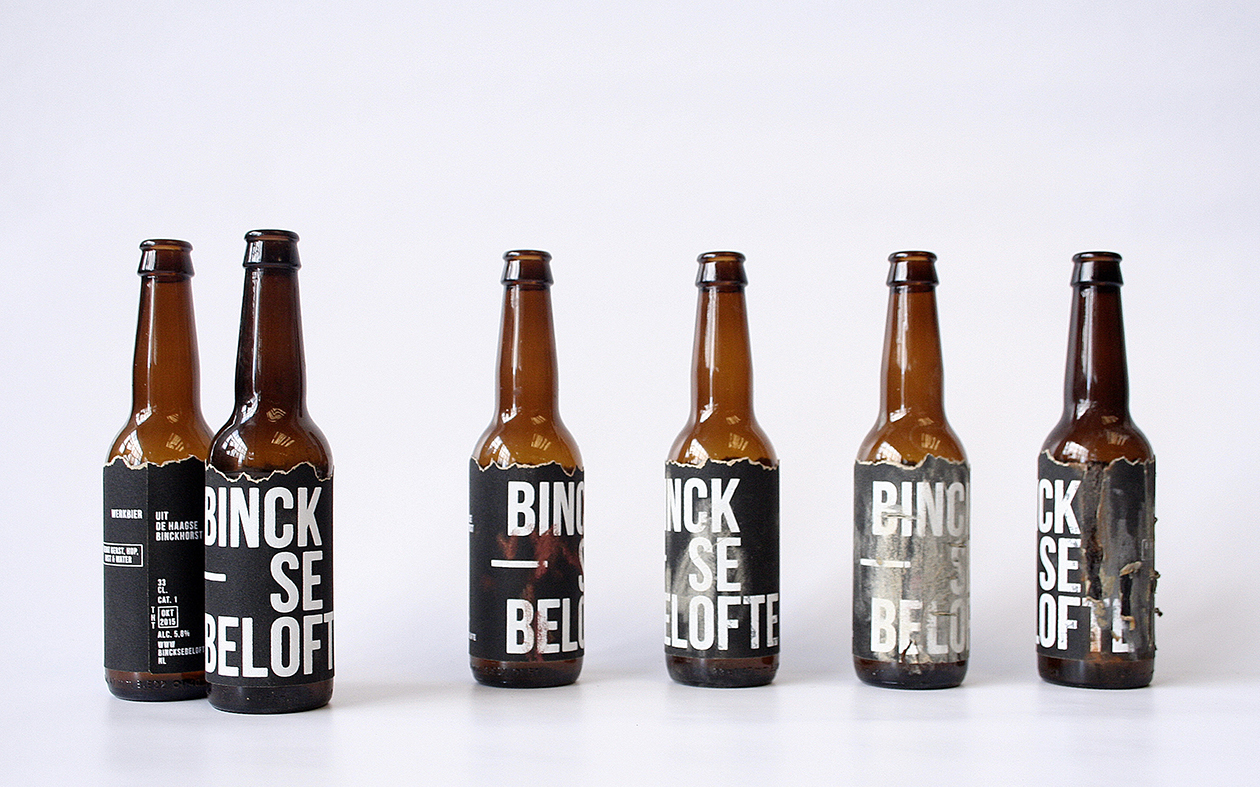 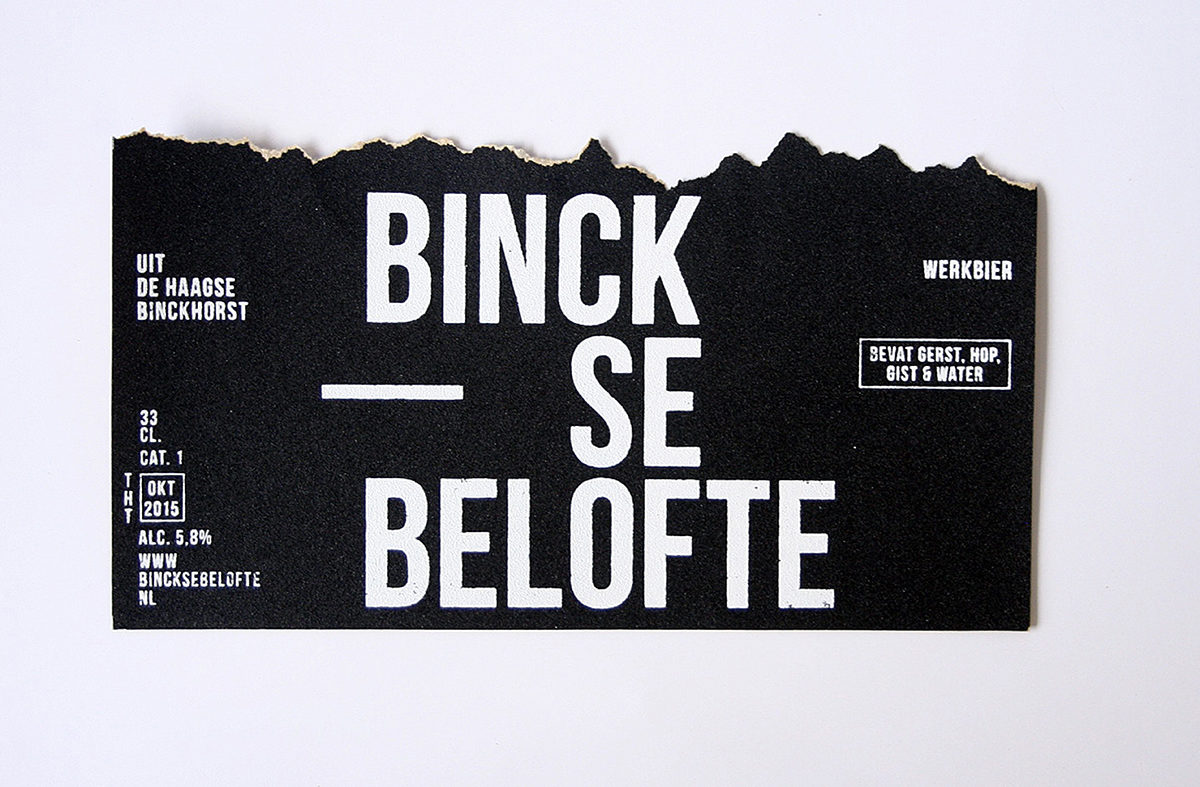 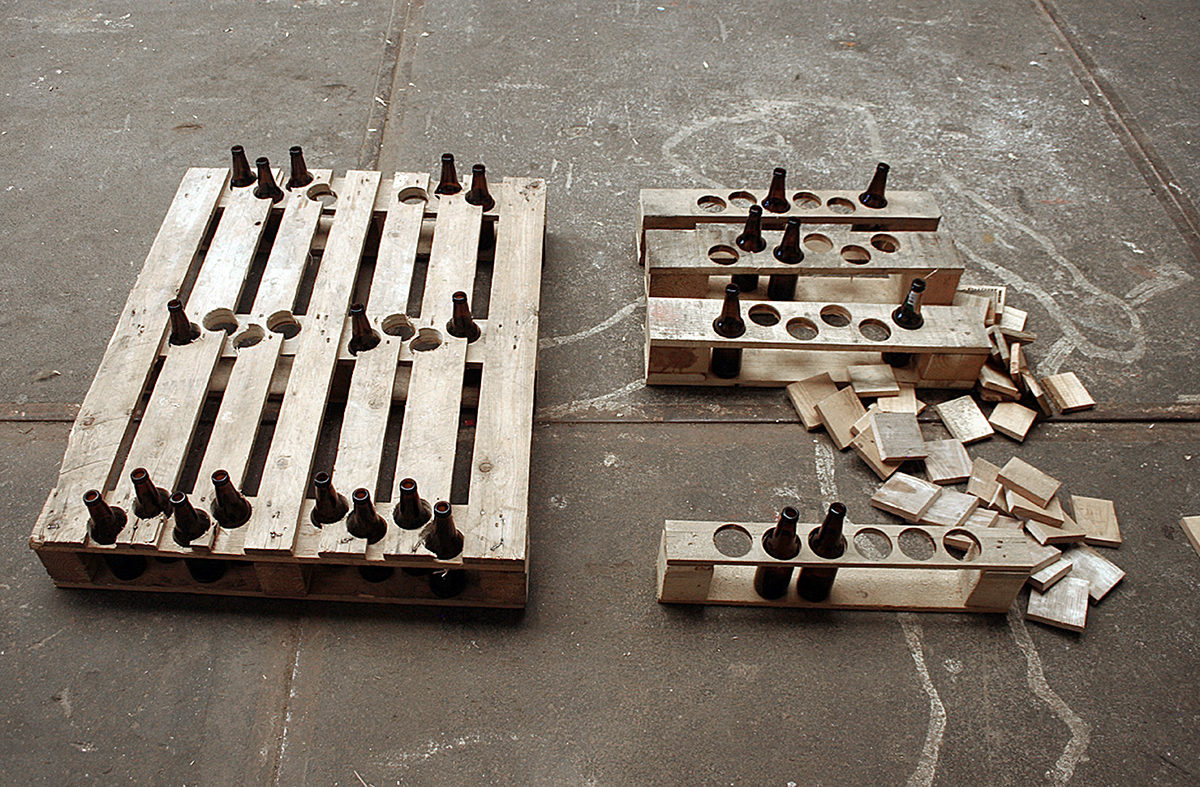 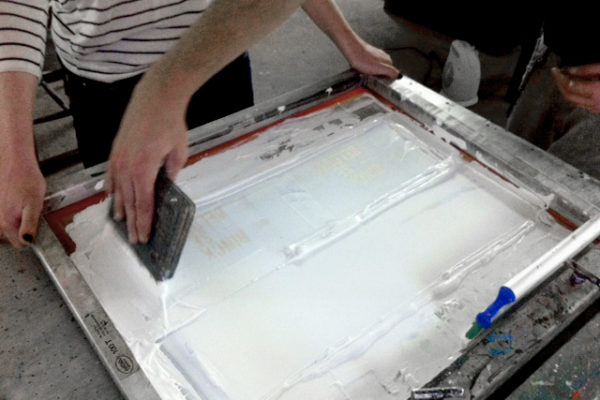 I Looked Into That Empty Bottle And I Saw Myself